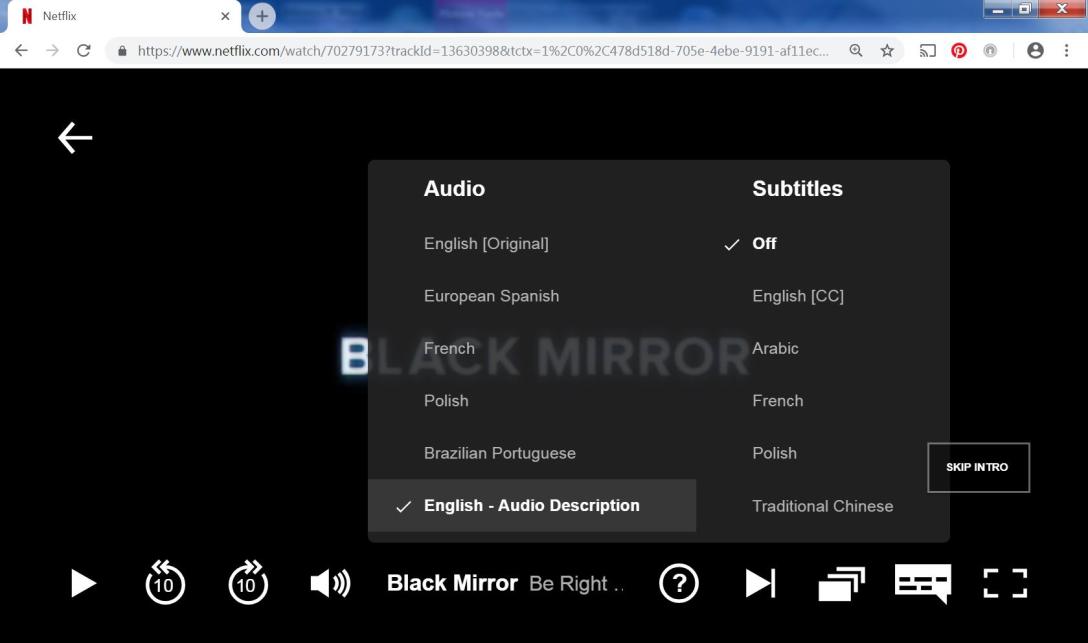 The place I get stared at the most when I’m using my white cane is the cinema. A few months ago I was queuing up with Other Half to buy some popcorn and an older lady did a dramatic double take. According to OH, she then proceeded to turn around and repeatedly look me up and down, mouth open, goggling at me, and she even started nudging her husband. It took OH leaning in, catching her eye and raising an eyebrow to stop her gawking.

This was an incredibly rude and unpleasant interaction. However, many people just don’t understand how someone with a visual impairment can enjoy film, tv or theatre.

As many of you are aware, I’ve only recently started opening up about my low vision. I’m still a ‘baby blind’ as one visually impaired pal affectionately calls me. Even though I was born with my disability it’s taken me a while to start accessing the tools, tech and resources that really enhance my independence.

So how does it work? Well Audio Description describes the actions happening on screen, or stage, in between the dialogue. Here is a great example of the Disney classic, Frozen.

As you can see from this clip, each movement, gesture, and emotive expression is described. Fitting neatly between the dialogue, singing or significant sounds, the narrator tells you exactly what is happening.

Before I used Audio Description I didn’t realise how much I was missing. I love films but going to the cinema was becoming increasingly exhausting, I would leave tired and with eye strain, often having missed key moments or got confused about who did what.

I started actively avoiding certain genres like action films, because the fast moving pace of car chases or punch ups were so visually confusing I lost interest.

So I started experimenting with audio description. First I tried it at home when watching tv and films on my computer or ipad, which I can get really close to and is usually my preferred way of watching stuff.

I instantly found that Audio Description enhanced my viewing experience.

Now I don’t have to concentrate so hard on which character is which, and action scenes that had previously been incomprehensible blurs are more accessible. I now know how much background information I’ve been missing! Crucial plot information is frequently conveyed when a character is reading a letter or they walk past a newspaper stand, all of this detail is brought alive by audio description.

It also means that I can watch tv in other places, like at a friend’s house or on holiday. Previously, if the layout of the living room meant I couldn’t comfortably sit within a few feet of the tv or the tv was just too darn small, I usually suffered in silence or tried to encourage people to chat or play a game instead. Now, as long as they have a Netflix account or the DVD has an AD soundtrack we can all enjoy the film or show together.

The increasing availability of online streaming services has really opened up Audio Description and made it a lot easier to access!

Netflix has fantastic Audio Description which you can click on or off so easily. The level of detail is usually really strong, and the narration always has a good level of emotion. As I’m a fan of some of the scarier shows on Netflix it’s great that the AD doesn’t skip the gory details! I’m yet to try Amazon Prime but have also heard that they have a good range of Audio Described shows.

The BBC has a good range of programmes with AD, but it’s a little flatter. Often the narrator sounds like a news reader, blankly listing details rather than engaging in the tension or emotion of the programme.

So it’s getting easier to access AD at home, but what about a trip to the cinema?

Nearly all popular blockbuster films have audio description tracks as standard, which is brilliant!

At the cinema, I simply request the Audio Description headset, and I receive a set of headphones with a receiver pack. It often confuses the crap out of the teenagers working on the ticket counter but after asking for a manager it’s usually quickly sorted out.

The pack has volume controls and is pre-set with the receiving channel. It works a bit like a radio with a signal being beamed in and the pack picking it up. Sometimes the audio can be a bit fuzzy and I have to angle the receiver pack to clear it up. The AD soundtrack is broadcast at the same time as the film so that the narration doesn’t interrupt the dialogue. So, when the film comes on, I listen to the AD on my headphones and it doesn’t disturb anyone else.

However, many cinemas do not fit the equipment for Audio Description in their screens. Or only have one or two screens with the equipment. Annoyingly Audio Described performances are regularly only on during the day, and not in the evenings. It’s so frustrating to have to hunt down a cinema often far away or see a film at an inconvenient time just to be able to access it. Depressingly, I can’t find a single central London cinema with AD performances. So Other Half and I go to a large multiplex which does have a good number of screens with AD equipment.

Recently, I raised this issue with the Picture House Central team, and they promised that they would investigate installing the equipment in the future. I wish more cinemas would fit Audio Description equipment as it would mean so many more people could access films. At the very least it would certainly open up independent cinema to a new audience.

One day I hope that Audio Description will be standard in cinemas for every showing.

In the future, I like to think that a blind person queuing up for the 18th film in the Avengers franchise won’t be such a surprise to other cinema goers.

Check out this great video from RNIB on audio description! It has some great clips. Also see some of my own AD reviews below!

My audio description winners so far:

I was DESPERATE to see this film. I love scary films and especially enjoy anything apocalypse based. However, I knew there was no way I could enjoy it without audio description as the film is entirely silent and uses subtitles throughout. The details of the AD was exquisite! Not only was every subtitle read out clearly, the tension that was created for the sighted audience visually and through the silence, was also built by the AD. There was a near perfect balance of the right information and pauses so that as a visually impaired person I could also enjoy the unnerving silences!

I’ve mentioned how useful AD is for fast paced action films, but it is also extremely useful in dramas which rely on complex visual displays of emotion. I can see faces on screens but often I can’t make out expressions. The AD for The Favourite was phenomenal! So much of the acting and story was conveyed through facial expressions and I had every smirk, frown and depressed gaze conveyed to me. It also didn’t shy away from the visual jokes, many of which were quite explicit!

This is the first play I’ve seen with Audio Description and it made a huge difference. I enjoyed both parts of the play with live audio description provided by Vocal Eyes link. I also enjoyed a touch tour, during which I met actors, was able to feel props and examine them close up, as well as pieces of scenery. There were many elements crucial to the story that I would have totally missed without the tour and the AD. It was also a really nice sociable experience to meet other visually impaired Potterheads!

I’m a huge fan of the Jurassic franchise, and still have nightmares about being chased by a T-Rex. However, it’s the worst AD I’ve experienced. It spent more time describing what characters were wearing than mentioning entire scene and location changes! Moments of tension and drama were totally missed in favour of unnecessary wardrobe details. Also, I want more details than “the dinosaur jumps”! What dinosaur? What does it look like? Where did it jump? If you can tell me exactly what kind of cashmere knit the female lead is wearing you can describe the sodding dinosaur!