People are often really surprised when I mention that one of my hobbies is gaming, especially when I’m holding a white cane in one hand. So how does a visually impaired person play video games?

First it’s important to understand that I have useful residual vision. On a good day, I can read large print and I can recognise faces up to a couple of metres. My vision does vary depending on the time of day, lighting, and how stressed or tired I am. So there are plenty of days when I’m too worn out and too blind to play. 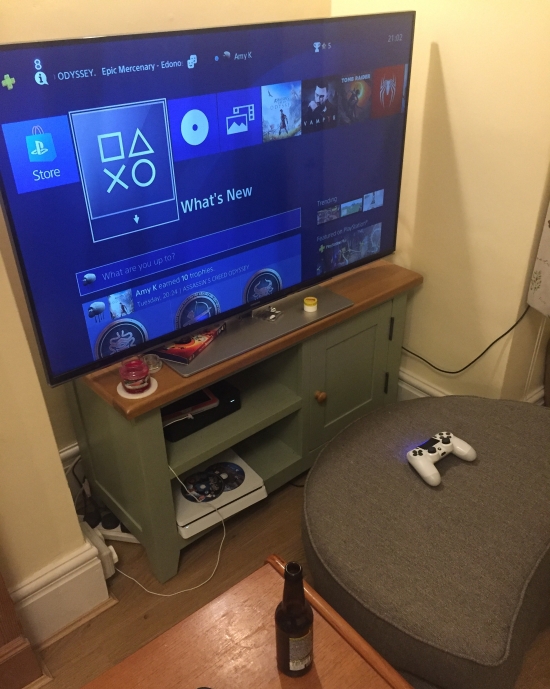 As you can see, I need to sit REALLY close to the screen. Yes there is barely room for my legs. With some game play menus I even need to get up and basically rub my nose up and down the screen to pick the right option!

My vision does limit the kind of games I can play. I’m pretty crap at most first person shooter games and racing games, both of which definitely require a lot more depth perception than I have.

I love third person action adventure games. I’m always looking for a great narrative, complex characters, plenty of puzzles and a smattering of combat! I also like the recent influence of RPG and open world on the action adventure genre.

My console of choice is the PlayStation 4, Other Half has an Xbox which I used to play on, but more of the games that I like are on PlayStation.

Games that I have played over the last couple of years include Witcher 3, the Tomb Raider reboot trilogy, Assassins Creed Syndicate, Origins and Odyssey, Uncharted 1 to 4, Horizon: Zero Dawn and Vampyr.

It’s worth noting that PlayStation has some pretty good accessibility settings from the start. Through the accessibility menu you can increase text size and make it bolder. There is also a really useful zoom function that allows you to pan around the screen with a magnified perspective. The existing white text on dark blue background is example of the kind of contrast I find easiest to see.

Unfortunately, most of these settings only apply to the PlayStation home page and menus. You can launch the zoom at any time in most games.

However, games are increasingly including their own accessibility menus. Shadow of the Tomb Raider included the ability to select difficulty levels based on the gameplay. You could select your preferred difficulty for combat, exploring and puzzles. This was great as I frequently got stuck on the rapid fire fights.

Uncharted 4 has been praised for it’s accessibility menus, including the extremely useful aim assist and camera view options. Assassin’s Creed Odyssey has also introduced the aim assist option, which helped me slay a few bosses!

Disability Game Reviews link is a great website which gives a thorough run down of the various accessibility settings and options.

One of the biggest challenges I face when gaming comes from teeny tiny text on complex cluttered menus and maps.

It’s a real pain to navigate menus and maps like these. First on my accessibility wish list would be some kind of dynamic text function. On iOS you can pre-set a preferred text sized and many apps, both Apple and others auto adapt to your preferred text size. Learn more about how visually impaired people use phones by checking out Blind Tech Expert Justin’s blog. The only text options on most games are for subtitle sizes, which is useful but rarely the ginormous text I would be more comfortable with. I would especially like to be able increase text size in dialogue options and in game play hints. The ability to zoom, increase text size and clearer layouts on menus and maps shouldn’t be a difficult adjustment for most developers.

The dream would be an interactive screen reader for menus, maps and dialogue. I hope that as voice recognition software improves it will be a realistic future option!

Another bug bear is the lighting or brightness of games. Usually you can auto adjust the brightness to a preferred setting but this doesn’t resolve issues with contrast or just the general palette of the game.

Vampyr was a lighting nightmare. As you play only at night, the dark brooding sinister atmosphere meant that I could barely see the character most of the time! I even tried turning the brightness up to 11, but still frequently found myself staring at an almost entirely black scene.

Horizon has been praised for it’s beautiful scenery, and indeed it is the most picturesque game I’ve ever played. However, the use of sunlight often resulted in really difficult to navigate sets in the open world. Mission areas were thrown into imperceptible shadow or the robot creatures were obscured by glare.

Early Uncharted games frequently suffered from a lack of contrast. This has been remedied by improved graphics, and background scenery, but also some fun accidentally accessible unlockable functions. You can turn the world into a myriad of colours offering a psychedelic rainbow of contrasting light and dark tones.

As mentioned above, I really benefit from aim assist and the ability to adjust difficulty levels for combat. Fast paced quick reaction time combat isn’t my strong point.

This clip highlights some of my short comings in combat! It also shows another difficult aspect of gameplay, the timed button tap. This relies on fast reactions and hitting the right button at exactly the right moment based on a visual cue. Often when I get stuck on these bits Other Half has to sit behind me and shout “NOW!”

It also shows a tool that I love, spidey senses! Most games now have the option to use some kind of spidey sense to highlight key objects and enemies. The bright contrast in Tomb Raider makes navigating the dingy crumbling caves a lot easier. As you saw in the clip above, the wolves became a bright red & resources are a brilliant yellow.

My preferred modus operandi is what I call the sneaky sneak! I much prefer games when I can be as stealthy and slow as often as possible. This is why I am a huge fan of the Assassins franchise.

Stealthy games allow me to plan and position myself. An added bonus is always the ability tag enemies or objectives especially if the symbols are bright and clear. Sneaking up and the ability to lay traps means I can dispatch enemies with one tap. This is much easier for me than the panicky aiming of a fire fight!

This was one of the real issues with Horizon: Zero Dawn. The characters, stories, and open world nature of the game really won big points for me. However, the auto aim was patchy and so much of the game relied on precise shots that I struggled. I had to spend hours crafting resources to upgrade the skills like setting traps and planting explosives so that I could complete the big bosses without the need for accurate shooting. One of the key narrative sequences needed an impossibly difficult shot which I had to ask OH to complete for me as there was no workaround.

It’s always extremely disappointing when I get excited for a game release, pay quite a bit of money for it and then realise it’s inaccessible. I’m lucky that Other Half will usually play it and share the cost, so at least it’s not a total waste. It’s often so difficult to tell about accessibility from trailers and even Beta testing rarely has the accessibility menus ready.

I had this happen recently with God of War. On paper it was the perfect game, open world fantasy third person action adventure. However, the aiming and throwing of the hammer was impossibly difficult and I could not get passed the first boss. Even if I change the difficulty level to the story setting there was another barrier. The menu text size was so tiny that there was no way I could enjoy mastering the complex crafting and spell repertoire without having OH do every menu function for me. I was pretty devastated because the story is supposed to be incredible.

I’ve enjoyed writing these two blogs about my passion for gaming so much I’ve decided that there should be a new addition to the Cane Adventures!

I will be reviewing all the games I play, giving accessibility ratings and judging according to all the usual criteria. It would great to hear from other disabled gamers, what kind of games do you play and what recent access changes have improved your gaming experience?

Next on the horizon…

Already praised for it’s accessibility settings this game promises to be an exciting delve into the Marvel universe.

The Last of Us

I recently discovered this game at an exhibition and with the sequel on the horizon I’m curious about this classic. After my flirtation with the horror genre in Shadow of the Tomb Raider I’m feeling brave enough to take on this apocalyptic thriller.