Amy asked me to do a blog several months ago. I liked the idea but didn’t know where to start. I’m also not a natural writer. I’m an engineer so am much happier with numbers and diagrams than words.

Yesterday Amy told me about Dr Phil saying “100 out of 100 relationships that involve caregiving fail” and obviously I disagree! Hearing that did give me the motivation to finally write this blog post.

Amy and I met online back in 2013 (before tinder, when online dating was still not as widespread as it is today). I am pretty sure that her dating profile did not mention her being partially sighted or having a disability. We got talking online about plans for the zombie apocalypse and eventually arranged to have dinner. I was very late for that first date and I’m pretty sure Amy nearly gave up – I now know that her friends were encouraging her to! It was the tubes fault so I think I was swiftly forgiven. Although I did have to buy dinner to apologise!

Later in that first date Amy did tell me that she was partially sighted, but not in the way she would describe today. It was hinted at, not fully described.

Her visual impairment was made to sound like an occasional thing (it does vary) and that her glasses make it better.

This was all true but in reality it only scratches the surface. The discussion ended when Amy told me that her vision gets worse when she is turned on and I made a joke about having something to aim for! Still not sure today how that joke really went down…

Obviously we kept dating and thinking back to that first year I really can’t remember many times that Amy mentioned her disability. I remember that she would be very tired after a day in the library reading and would maybe have a few more lie-ins as a result, but I thought this was classic lazy student stuff!

I now know that she was just hiding the impact her low vision was having on her.

She moved in with me after about a year and it started getting harder to hide. Navigating a new space (which was quite cluttered I admit!) she would have a lot of bruises on her arms and thighs from bumping into stuff. She was also a bit clumsy and broke a few glasses.

I didn’t really realise how bad it was until the intense writing up period of the PhD. I’m sure the stress of that situation made it worse, but the long days reading and writing were really making her vision bad. She would have to go to bed early, and get a good night’s sleep, or she wouldn’t be able to work the next day. I was probably a classic grumpy boy annoyed at having to go to bed early too, but at least I started to understand.

It was in this period that I really started to ‘care’ for Amy in the sense that Dr Phil was referring to. This was not primarily due to her visual impairment, but the mental health issues brought on by her PhD resulting in anxiety and depression. Looking back now, I am sure that not confronting how her vision impacted her work made her mental health worse. That was a difficult time, and probably the only period of our relationship where I would consider myself to have been a ‘caregiver.’ It doesn’t mean I stopped loving her, or that our relationship suffered.

It was a hard period for both of us but we made it through and are stronger now as a result.

Now that the PhD is done, she is not in that place anymore, but it is unlikely to completely go away. It is now something we both keep an eye out for to try and nip it in the butt before it sets root.

The last few years Amy has started being much more open and honest about her disability and sight loss and I think it has made our relationship better. I now understand why she might want to go to bed early, or be a bit grumpy one day.

Knowing what’s going on with your partner and talking about it is always a good thing – Dr Phil might agree with that one at least!

When Amy started using the cane for the first time it was a bit of a shock. It really drove home how much she needed it more than anything else. It increased her confidence and her independence. These things had really taken a hit when anxiety and depression had their hold. I also got some excellent training from the Guide Dogs team so I could help her more when out and about. The support she got as a result of opening up about her disability, especially as a result of talking to other people with similar challenges, really helped her. It didn’t change her vision, but had a massive benefit for her mental health. 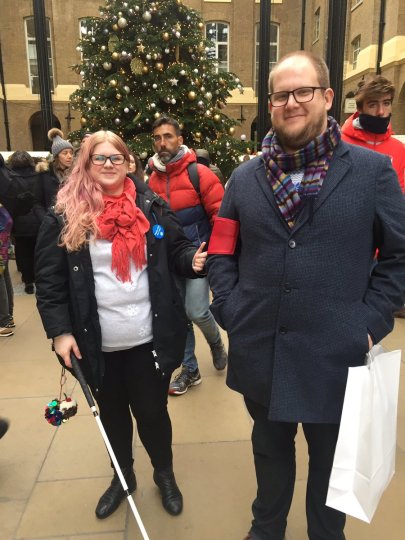 Amy being able to articulate what she needs has meant I now give her more assistance which might fit that description of ‘caregiving.’ I don’t see the downside though.

Who wouldn’t want to make their partner’s life a bit easier, help them get around and get the most from life.

Everybody does it when their partner is ill – this is no different except in duration. At worst it means I might do more of the chores one week, or have to pick her up in the car when really I want to carry on playing the Xbox, but we talk about it and figure out a compromise.

The final thing I would say is that I always try to make any ‘care’ I give Amy about giving her independence. I don’t want her to feel like she can’t do things without me. My care is about supporting her to live her life. Doing the cooking, or driving her somewhere, is my love enabling her to work, volunteer and have a social life. I think that is important so that the relationship remains strong – and after 6 years, ours certainly is. 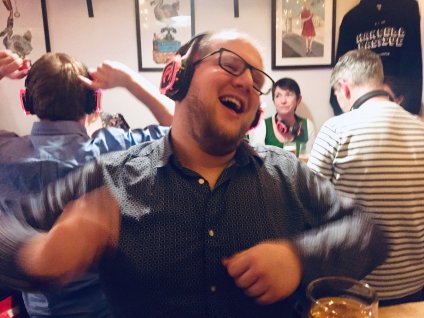 This post was written by Other Half, engineer, lego enthusiast, Star Wars nerd, consumer of chocolate biscuits… and (in Amy’s opinion) an incredible partner and caregiver.

1 thought on “View from the Other Half”